A beautiful day in the neighborhood: Fred Rogers Productions moves to SouthSide Works 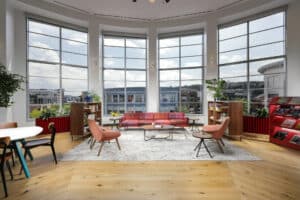 The move represents a 3,000-square-foot expansion for the company. For about eight years, it had occupied about 8,000 square feet of space on Wharton Street, also on the South Side.

Chris Arnold, chief operating officer of Fred Rogers Productions, said one of the reasons for the move was to create an environment “that reflects the joy that each person brings” to the office and work.

Another was to provide private work and common areas “inspired by the legacy of Fred Rogers and Mister Rogers’ Neighborhood” while at the same time fostering an environment to “allow our teams to create shows in that same spirit but with new ways of connecting the children.”

In keeping with those goals, employees are greeted each day by a replica of Daniel Tiger and the clock tower from Mister Rogers’ Neighborhood.

There’s also a plaid couch similar to the one used in the iconic TV show, as well as a board room that reimagines elements from King Friday’s castle.

The space also features colorful carpeting and doors and lights replicating porch lights outside each office. They are turned on when employees are “home.”

About 37 people occupy the new space, which was finished a few months ago.

The third floor location, which also includes a private terrace, overlooks the new SouthSide Works commons area and is near the Cheesecake Factory.

To help get to know its new neighbors, Fred Rogers Productions will participate in the SouthSide Works fall celebration this Saturday with screenings from FRP series Donkey Hodie, Alma’s Way, and Daniel Tiger’s Neighborhood.

The space was designed by R3A Architecture and Workscape and built by contractor A. Martini and Company. Southside Works owner SomeraRoad also was involved.

“It was a very conservative budget. We really stretched it and tried to be creative in materials,” Mr. Arnold said, noting that those involved faced “intense supply chain issues and really severe price increases” in building out the space.

He praised those involved in the design and construction for their work.

“The level of creativity and problem solving they used, it was just outstanding,” he said.